AMLO is established according to AMLCFT Law, as special and operational independent unit within Ministry of Finance.

Croatian Parliament adopted the new Anti-Money Laundering and Terrorism Financing Law on 27 October 2017 and it was published in the Official Gazette No 108/17.

Consequently, Croatian legislation is harmonised with Directive (EU) 2015/849 of the European Parliament and of the Council of 20 May 2015 on the prevention of the use of the financial system for the purposes of money laundering or terrorist financing (4th EU AML Directive) and FATF (2012) Recommendations.

2. Service for Prevention and Supervision of Reporting entities
a. Department for Financial and Non-financial institutions
b. Department for Inter-Institutional and International Coperation 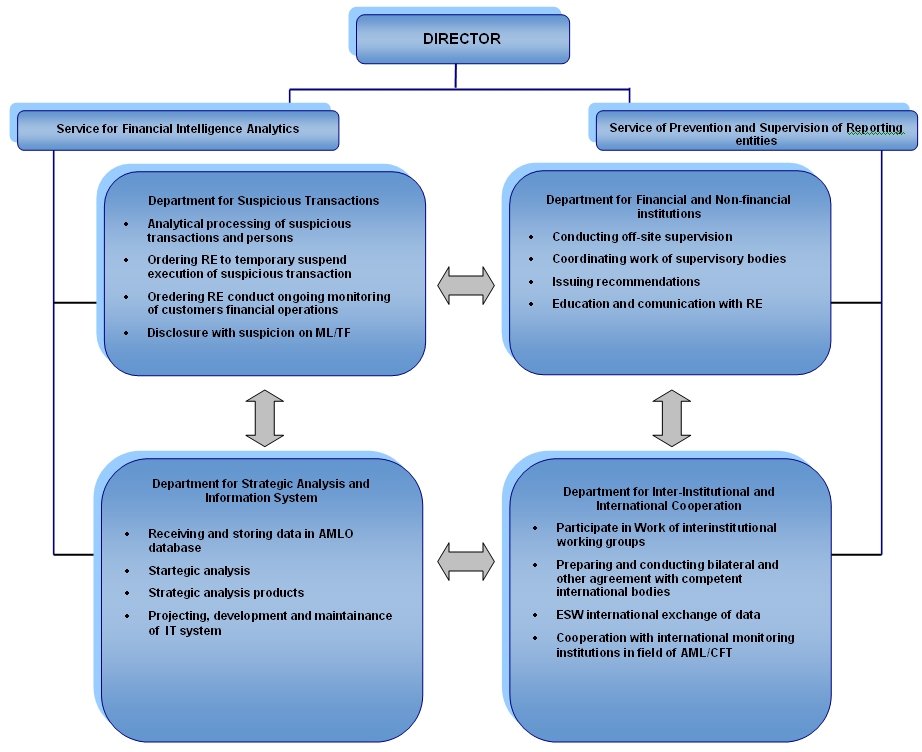 AML/CFT SYSTEM IN THE REPUBLIC OF CROATIA

AMLTF Law and international standards define the money laundering and terrorist financing prevention system as the scope of competence of not only one institution, but a system with legally defined roles of each participant and their mutual interaction and cooperation.

AMLO is just one link in the chain of money laundering and terrorist financing prevention system, which can fully contribute to prevention of use of the financial system of Republic of Croatia for money laundering and terrorist financing only through interactive cooperation with other competent authorities (State Attorney's Office, USKOK, Police, Security Intelligence Agency (SOA), CNB, CFSSA and supervisory services of the Ministry of Finance) and foreign FIUs.

The key element of prevention system is the obligation of banks and other reporting entities obliged by the Law for reporting the AMLO on:

a) the Croatian National Bank,
b) the Croatian Financial Services Supervisory Agency,
c) the Financial Inspectorate of the Republic of Croatia,
d) the Tax Administration.

The Croatian National Bank: conducts supervision of compliance with the Law with banks and other credit institutions.

The Customs Administration: conducts controll of cash transfer across the state border.

Financial intelligence unit:
AMLO: as the central national body in charge for receiving, analysing and disseminating to competent bodies cases with suspicion of ML/TF is a part of the preventive system, an intermediary body, between financial and non-financial sector (banks and others), which report suspicious transactions to the AMLO, on the one hand, and prosecution bodies (police and State Attorney’s Offices), as well as courts, on the other.

LEAs
Police: conducts police inquiries and financial investigations of money laundering criminal offences by acting on cases initiated from the AMLO, from other supervision bodies, or on its own initiative.

Prosecutor
State Attorney: directs the work of the police in treatment of money laundering cases received from the AMLO and other bodies in the ML/TF prevention system, and coordinates work of other competent bodies.

Courts: at the court are conducted criminal proceedings for the criminal offence of money laundering and confiscation of proceeds, initiated by all the competent authorities from the ML/TF prevention system.

Accordingly, the AMLO, above all, represents a part of the prevention system, which has primary responsibility to prevent use of the financial system for money laundering and terrorist financing purposes. Therefore, the AMLO is not the investigative body competent for conducting financial investigations, nor the inspection body which conducts direct supervision over reporting entities by the Law (AMLO conducts only off-site supervision according to Art 84 of AMLTF Law), because according to the Law and international standards, other bodies, namely prosecution bodies and supervision bodies in the ML/TF prevention system, are responsible for the enforcement of these actions.